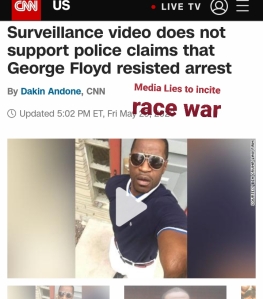 CNN falsely reports that George Floyd did not resist arrest– when in fact he did.

CNN, MSNBC and many other mainstream media outlets have been reporting on the George Floyd case. A 46-year old unarmed black man who was killed by a white officer police Dereck Chauvin who obviously used unjustifed excessive force by placing his entire body weight on Floyd’s neck while restraining him.

Floyd used a fake $20 bill to purchase cigarettes at a Minneapolis convenience store that prompted a cashier to call police after the cashier followed him to his SUV to ask for the item back, Floyd refused. The cashier reported to police that Floyd was belligerent and reaked of alcohol.

CNN and other news outlets reported that Floyd did not resist arrest and attempted to peacefully go into police custody for questioning.

After some deep digging, I found this to be a lie! Officers attempted to put Floyd in the back seat of a police cruiser but Floyd appears to kick at the officers while inside the backseat of the car and crawls out to the other side of the vehicle where two other officers manage to wrestle him to the ground.

This is when officer Chauvin places his knee on the neck of Floyd for several minutes to which ultimately contributed to his death i.e.- asphyxiation.

A  Minneapolis Medical Examiners toxicology report also shows that Floyd had two extremely deadly substances in his body – methamphetamine and Fentanyl, which  may have further contributed to his death. Close up video surveillance shows Floyd dropping a plastic bag filled with a white substance while handcuffed. I couldn’t find any police reports stating what was in that bag or if any officers are aware that he managed to dump it out while handcuffed.

Conspiracy theorists say that the toxicology report is fake and an attempted cover up, however a background investigation shows that Floyd has been arrested multiple times for drug possession and other crimes which suggest familiarity with illegal substances. 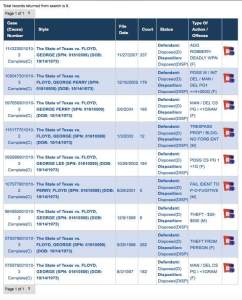 George Floyd was arrested numerous times for drug charges and robbery that included him sticking a gun to a pregnant woman’s stomach while his friends robbed the home.

While there is no question that Floyd was a victim of excessive force, and Officer Chauvin deserves a prison sentence, we should shame the mainstream media for failing to report the full story. Instead, they immediately spun the narrative that Floyd was an innocent black man minding his own business where he was brutally attacked by white officers for no apparent reason.

The reason the mainstream media did this is simple…. headlines using “White Vs Black” narratives gets more views and more views means more money for the news networks from advertisers!

Don’t fall for the manufactured race wars! Its not white vs black,  it’s rich vs poor. Ask Daniel Shaver or Kelly Thomas, two white victims of police brutality to which the media largely ignored because they knew it wouldn’t get much viewership. Abuse of power doesn’t discriminate against those who dont know their rights or who cant afford a good lawyer.

Mainstream media has no qualms about inciting race wars if it gets people to tune in and watch. More views= More money. Drama sales. Headlines involving proposed racism sale.

With all of that being said, officers need to be trained better in defensive tactics, de-esculation, and we need to remove arrest/ticketing quotas on officers that encourage them to go after easy targets—the poor and uninformed.

When officers are promoted to a higher rank based on positive community opinions rather than stressful arrest quotas, both officers and civilians will be put in a much less stressful scenario.