The video above shows Tony Timpa of Dallas, a white man who was killed by aphysixation after having pressure placed on his neck by 4 officers, one who happened to be black. The incident happened about 10 months ago. Sounds like a George Floyd rip off scenario, right? Or is it the other way around? 322 white men were killed by police last year, 30 of which were unarmed.

How common is this scenario and why does it not receive the 24/7 footage that a black victim of Police brutality may get? It’s simple. Headlines sale! Much like the headline of this article, news media knows which words will ruffle emotions and get more views even if the headline is bias. (We are all bias- even me).

Excessive force by cops against victims both black and white are huge problems in the USA. By why are there no riots, protests, or outrage for non-black victims.

#Equality- denounces the privilege of being heterosexual and undermines traditional relationships and notions of femininity and masculinity.

Black people are not being systemically hunted down by police, but you could argue that poor people are. Stressful arrest/citation quotas encourage cops to patrol poor neighborhoods more aggressively as it is more likely they will get more action in those areas.

Police themselves are also victims of false allegations of brutality as well. Many offenders who have just robbed a store or sold drugs will go limp upon arrest and cry foul. Then an angry mob shows up to film. I’ve seen this happen with my own eyes.

Everyone loves to feel special and compete for victim status—- yet not everyone is so privileged to get the mainstream medias 24/7 attention.

So let’s look below at some cases and see if the “white victims of police brutality” is really such a rare phenomena as liberal activists claim. 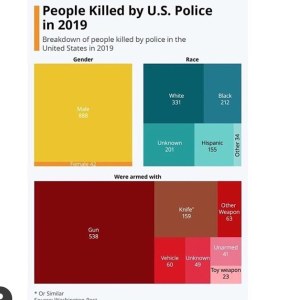 Data shows that only 49 unarmed people are killed by police each year. Atleast half are white. And almost all victims of police death are males.

Even if you disagree with my narrative that police brutality isn’t a race problem but a poor training or abuse of power problem, we can easily see “female privilege” in the statistics that women are almost never the victims in police killings.

Alas, unlike mainstream media, that doesnt matter to me. The actions matter. Race, gender, and status are inconsequential to me. All victims are shared in the struggle. Also, it is obscene for the media to declare a war on cops when in fact, 95% of all interactions with police do not result in violence.

If you think black cops are immune, think again. In black dominated police precincts, incidents of brutality and murder by black cops are comparable to white cops. Below, see these two videos. Two black officers beating another black suspect in Baltimore and another incident involving two black officers shooting a white subway rider.

So, what is the point of this article? To deflect from black victims of police brutality? Absolutley not! Alton Sterling, Mike Brown, George Floyd….all are victims of abuse of power and the offending officers should be served justice.

The point of this article is to switch the narrative from, “White people are hunting down black people” and “white privilege protects white people from abuse”…..and change that narrative to “Let’s reform and protest police brutality in general”. Change the narrative from one that focuses on race and switch it to the real struggle…

Its the powerful vs the weak. When we blame everything wrong with society on whiteness, it creates a natural defense mechanism by disenfranchised low-income whites who feel personally attacked for things they never did. The extreme notion that whites have an easy life is why Trump was elected to begin with. Voting for Trump was simply a protest vote elected by those fed up with politcal correctness.

Personally, I voted for Gary Johnson, but, thats another issue.

See below, a video of a black leader accusing a rich and successful black radio host of having “white privilege”. Once she realizes he is black, she apologizes…but the damage was done. She assumed that because a man was successful, he must have been white. That black people cannot be rich….tell that to Oprah! The new popular trend of hating whiteness in order to seem edgy and cool takes away and divides from our onesness as a human species.

See my article, “How I discovered my White Privilege”.

In this article, I describe what it’s like growing up as a white guy in a predominantly black city. The fact is, no matter where you go in the world, if you look different from everybody else, you will get treated differently.  As Morgan Freeman once said, ” If we are going to cure racism, we have to stop talking about it–”

Lastly, I will say this. In order to fix police brutality issues, we much change the nature of policing and get rid of quotas! In order for an officer to keep his job, he must arrest or ticket a certain number of people each month. This makes poor people a larger target. If we remove quotas from officers they can spend more time making friendly connections with the community.

Until the issue of race,quotas, and hatred for officers is solved, the problem will never get fixed. Say what you want about cops, but we are better for having them. Despite all the negative press, you are more likely to be struck by lightning than to be killed by a cop. And on that note, please watch this compilation of good cops performing well!— Randell Stroud