As I approached the 6th district courthouse in Nashville,Tn,  on Oct.3rd, 2017, around 6pm, there was a group of Native Americans protesting outside the building, chanting,

A local Native American, Albert Bender, lead the group. We briefly spoke about the DCS and CPS epidemic of kidnapping native children from reservations, displacing them in white homes, thus, erasing their culture.  After a few minutes of chit-chat, we went inside the court building in an attempt to attend the Councilman’s chambers for their General Assembly Hearings. Mr.Bender wanted to adopt a resolution on the agenda to change, “Columbus Day” to formally be known as, “Indigenous Peoples’ Day”.  He was barred from entry alongside his large group of followers.

The GA was mainly focusing on gentrification issues and building permits. For years, many  wealthy New Yorkers and Californians have been moving to Nashville.  Development has been booming! Businesses, restaurants, apartment skyrises,— all popping up like a virus! Multiplying by the day.

In many respects, this development has been amazing for the city. However, many of the locals are aggravated by the development due to increased traffic and rising costs of living from property tax hikes caused by development. Many activists charged the councilmen, stating that the economy was bad, they needed jobs, but also feared that development and rising costs were forcing them out of their homes. Their once affordable apartments were now un-affordable. Many locals were being forced to move to surrounding areas like Antioch and Murfreesboro. Places that were less populated and had higher rates of poverty and crime.

Growing up on the east side of Nashville, my heart really went out for those people. Many of the housing projects had been bulldozed, and dozens of families were displaced and forced to move to more affordable areas. Many of those families had lived in the area all their lives.  I grew up , lower-middle class, not rich, not struggling, but definitely on a budget!

In my younger years, I would have certainly been on board with the protests. However, after reading Niccolo Machiavelli’s , “The Prince” , running for office in 2012, and having gone through the challenges of adult life, — I had realized it was a fruitless war. 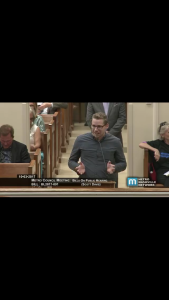 I addressed the GA law-makers, including Vice-Mayor David-Briley, whereas I shamed both protesters and law makers.  I shamed the protesters, who were against the new hotels being built due to “increased traffic”, while they simultaneously cried out that their weren’t enough jobs. I shamed the congress by exposing the fact that, they weren’t really listening, they were just passing bills and merely acting as if the people’s voices mattered. It was nothing more than a “dog and pony show” as I called it.

I reminded my audience that, Nashville looked like New York City 50 years ago. However, with population increases and development, it is a consequence of “political realism”.  If you cannot adapt to development, you will be forced to move out. It sounded harsh (and it was), but it is the reality and will always be the reality. Big business and state interests will always overshadow the plight of the poor and minorities.

It wasn’t what everyone wanted to hear, but it was the truth.

This is my view towards gentrification. And I am no hypocrite! I myself am also being forced out of Nashville due to not being able to afford the rising costs of rent. It is sad, but I cannot argue with political realism. I will pack my bags and see where I can thrive. This is the nature of our human existence.

Most of my activism focuses on reform, realism with a hint of idealism, and communication. However, when it comes to gentrification, there is no way around it. When wealthy individuals invade a small city, they will take it over, and the local government will salivate at the money to be made. The poor will be given transitional housing, and small acts of assistance, only to be slowly phased out. It has always been this way and it always will be. Cities crash and cities boom. Currently, Nashville is booming! If you aren’t a doctor, lawyer, business tycoon, or trust fund kid, then you probably aren’t feeling too confident living in metropolitan Nashville at the moment.

While my speech didn’t offer any “real” solutions, it did cause a silence amongst the crowd coupled with a bit of introspection. My words cut deep. The protesters knew that their plight was futile, and the politicians knew that this entire “hearing” on gentrification was nothing more than a formality.  I even encouraged some of the citizens to move to Missouri at one point in my speech. (I’m sure the councilman leader didn’t like those words!)

I wasn’t expecting to give a speech that day. It was impromptu, and I was little nervous, but I felt that it had to be said, thus, I took to the stand. After my words were completed, I said, “Thank you”, and simply walked off.

You could cut the tension in the room with a knife!

There were looks of disappointment on the faces of the protesters… as if I had revealed that Santa wasn’t real!

There were looks of cynical laughter on the faces of the politicians, as if I had belittled their power based in front of the public or as if I was just a peon.

Regardless, the truth was spoken!

In 20 years, Nashville will become a major city like Chicago or Manhattan, or the boom will stop, Nashville will crash and return to its former small city charm, whereas an influx of the lower-income brackets of society will return to their former homes.

As long as big business and big government remain friends, gentrification is here to stay.