Cambodia seems to be all the rage this week in the news. UN Human rights workers being accused of bribery in the region (albeit some say it is unfounded and politically motivated), Japanese Prime Minister Fumio Kishida’s tour through south east Asia that blatantly excluded Cambodia possibly due to political tensions with the aforementioned UN scandal, tourism records being broken (rise from 2.5 million tourists in 2010 to 4.8 million tourists visiting Cambodia (most notably in Siem Reap) in 2015. 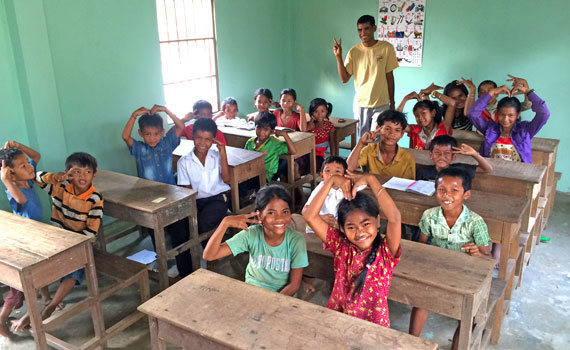 Amongst all of these incidents, the young students of Cambodia are not exempt. A heat wave caused by  “El Nino” (a warming phenomenon stirring in the pacific ocean),  has swept across the country with temperatures as high as 42 degrees Celsius (or 107 degrees Fahrenheit)  being recorded. Cambodia’s education minister, Hang Chuon Naron, signed a rule into effect today that requires schools to release students one hour early until the rainy season begins which will bring cooler temperatures.

Like most government ran public schools in Cambodia, funding is sparse, thus conveniences like A/C or high powered fans are not always available.  School officials have been advised to keep students well hydrated and to monitor everyone for signs of heat-stroke.  Dizziness, lack of sweating, and light headedness are usually the first symptoms to be on the look out for.

Cambodia isn’t the only area effected in the region. Thailand’s governmental authorities seem to be following suit in similar fashion as their students and populace face the wrath of El Nino.

Unlike here in Tennessee or other places in the world that have a winter season that includes snow and ice, south-east Asian countries have a “rainy season” instead. A period that is usually somewhere between late August to October where temperatures cool off anywhere from 10-25 degrees from what the summer season has to offer.

Until then, the tough students of Cambodia and Southeast Asia must hang on. Hopefully, Nalini, and other organizations like ours,  can raise funds to provide an air conditioner for every classroom. As if studying with limited supplies isn’t hard enough without having to deal with boiling hot temperatures. If you thought paying attention in class was challenging, try doing it when you are on the verge of having a heat-stroke!

Our prayers are with the students and people of Cambodia,Southeast Asia , and every determined student around the world fighting to give themselves a certified/verifiable education.